Penguin with a Pumpgun is a project for the PICO8 console that I’ve had a lot of fun with. It’s a simple rogue-likeish game where you control a penguin through a hospital infected by zombies.

Your goal is to get out of the hospital.

Another prototype I’ve been working on is Penguin Wizard, an attempt to make a rogue-like where you control a … Penguin Wizard through levels, using your magic hat to cast spells. It’s built on the PICO8 platform and was my first real attempt at a game on that. 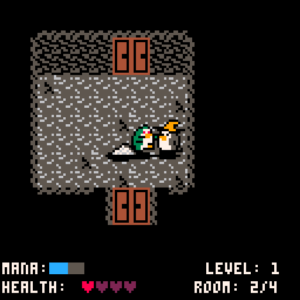 In collaboration with my friend Anders we started working on Allan. A game about a ghost hunter that helps people getting rid of paranormal activity (and their heirlooms as well).

The game is a rogue-like where the player enters a new house every time a new game is started. It’s unforgiving and the player can leave the current level if he wants to, taking all the loot with him but without the opportunity to ever get back to the same house again.

We worked on a procedural house generator, which we unit tested and got up and running. We got a simple combat system running and an inventory system.

The current state is on hold unfortunately but we want to pick it up again sometime.

March of the Penguins (working title)

Another game that Anders and I have been working on, based on an old prototype that I did some time ago. It’s a 2D platformer targeted towards smartphones where you control a penguin, learning new tricks as you go.

For this project I made a tool to load in (and save) .pyxel files from the PyxelEdit application that I have been using a lot for drawing and tiling up levels. The tool made it fairly easy to import tiles, levels and export them back to the .pyxel format so that it was possible to reopen the file in PyxelEdit with the changes made.

We have made a couple of test levels, but the project is currently on hold.

I really wanted to make a local four-player game about getting some bad-ass cowboy’s hidden treasure before your friends. The game should take place in a western inspired world with a couple of mini-games whenever you meet your opponents. One of the prototypes I made was a wave-based brawler.

Started as a small project I wanted to do during a vacation. The game should be a puzzler with a pre-defined map, but with random items.

The player uses magic to solve puzzles and beat enemies.